New Study Suggests Mistakes in Nearly Half of All Medicare Bills

Do you know how many of your Medicare claims contain material errors? The American Medical Association suggested in 2013 that about 7.1 percent of all claims had errors and recommended more claims automation. But a more recent study by consumer advocacy group NerdWallet pegs the number of inaccurate claims at nearly 50 percent, a striking claim. Their comprehensive survey also found that:

The True Scope of the Problem

Dire as these findings seem, even they underestimate the scope of the problem, according to Medical Billing Advocates of America, who say that overall, between 75 and 80 percent of all medical bills and insurance claims contain at least one error. It's no wonder that more consumers are uncomfortable trying to understand the medical billing and health insurance claim processes (32 percent) than they are navigating the home mortgage process (25 percent) or applying for a car loan (15 percent).

In nearly all cases, the billing errors financially disadvantaged the patient, leaving him responsible for inaccurate balances. The review did not identify instances in which the amount of the claim was less than the value of the care and services provided.

The Effect on Health Care Providers

It's not just patients who suffer from billing errors in health insurance claims, either. In February, the Centers for Medicare and Medicaid Services (CMS) issued final rules for providers who have received overpayments, a major plank in the Affordable Care Act. The rules lay out specific procedures providers must follow to avoid liability under the Overpayment Law and include a six year look-back period for recouping erroneous payments. These new rules went into effect on March 14, 2016.

According to the CMS, in fiscal year 2014, the agency's auditors identified and reviewed over 1.1 million erroneous claims with overcharges which resulted in over $2.5 billion in overpayments, of which $1.6 billion was returned to the Medicare Trust Fund after program and administrative costs were deducted.

So what can providers do to ensure accurate billing? The first step is an internal audit of your coding and documentation practices; using certified, professional coders with experience in your specialty gives you greater security that your billing is accurate and fully supported by documentation. Review your EHR and internal processes to ensure documentation integrity—all information is collected and recorded properly.

Finally, be sure your providers are educated about E/M codes; these codes are frequently at higher risk for audit, especially if they have an unusual coding profile. Too often, providers get into the habit of selecting a particular code regardless of whether the encounter documentation supports it. M-Scribe's team of credentialed coding and billing professionals can help you evaluate your billing practices to see if you have areas of potential vulnerability. Contact us today for a consultation. 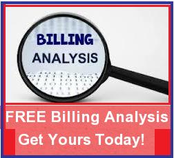