Many emergency room and urgent care providers have noticed that collecting payment from a growing number of payers is becoming more difficult. The scope of payable charges seems to be narrowing - because it is. Here’s a bit of background on why as well as how to counter this trend.

Some insurance companies, including Anthem and Blue Cross have sent out warnings over the past year of implementing stricter guidelines for emergency room coverage.  Patients increasingly show up in ERs with itchy eyes or other non-life threatening symptoms, resulting in denied claims that push the cost burden onto the patient.
More insurers nationwide are following suit, resulting in payment or denial ultimately based on the final diagnosis rather than the symptoms that sent the patient to the ER or urgent care center in the first place – a reversal from earlier established practices. Many doctors and their patients are understandably crying foul, with complaints that insurers are expecting patients to be able to make medical decisions for which they’re not qualified.

Providers and Consumers Push Back

While urging patients to “see their regular doctor first” or go to an urgent care facility, insurers assume that policyholders possess the knowledge to differentiate between life-threatening and non life-threatening symptoms.

In response, a growing number of physicians, including those in ERs as well as in urgent care centers, believe that the pendulum has swung too far in the insurers’ favor, leaving patients stuck with unaffordable bills and physicians with unpaid claims that eventually are headed for collections

An emergency room was traditionally where patients were taken for treatment for acute trauma or illness, often of a life-threatening nature, as well as problems that arose outside of regular doctors’ office hours. Some examples would be severe burns, heart attack symptoms, or heavy bleeding. For less-urgent conditions such as an upset stomach, animal bites or flu, patients usually scheduled an appointment with their regular doctor.

Unfortunately, many people today don’t have a primary physician or the wait to see a doctor is too long. So, in absence of better options it’s off to the local ER for treatment.

To help bridge the healthcare availability gap, some enterprising hospitals and other health organizations saw an opportunity: to serve a market segment that as of 2012 had little to no access to primary care physicians on weekends or weekly after-hours, and freestanding urgent-care centers were created.

What levels of treatment do these provide?

An ER, particularly one associated with a hospital, normally offers a higher level of care, with more sophisticated technologies and doctors who are specialists in a variety of conditions, such as cardiologists or surgeons.

As might be expected, all that technology and medical expertise comes with a price tag, making insurers balk at paying out claims that they see could have been treated more cheaply at an urgent care center.

Urgent Care Facilities
While ERs tend to treat the sickest people first an urgent care center usually takes patients on a first-come basis. They tend to be open until 9 p.m. or later; however, unlike a primary care doctor or emergency room, they normally do not keep medical records.

Urgent care centers seldom see or treat serious medical issues and are staffed and equipped accordingly. They may have basic lab or x-ray equipment but nothing as sophisticated as an ER.

Urgent care centers often have family practice doctors on staff, whereas walk-in clinics in particular are more likely to be staffed by nurse practitioners, which further limits the type of services available.

The Affordable Care Act of 2010 sets forth strict rules for emergency room coverage.  Since early 2017, however, there has been a tendency by insurers to push against these boundaries, with whatever successes physicians had in recent years being reversed in the push back against policies that paid on diagnosis rather than symptoms.

Physicians, therefore, should be able to expect to be reimbursed for reasonable, documentable services appropriate to the diagnosis rendered. The narrowing of the networks, especially in rural areas that have traditionally been medically under served, means that physicians must fight harder for fair compensation on services rendered and for which patients have already paid.

How can urgent care providers improve their reimbursement rates?

- Delays in following up on self-pays

- Limited working and follow-up of denials

- Delays in following up private-pay claims

- Changes in an insurer’s payment processes

How can a medical billing service help urgent care providers?

Look for a medical claims billing and practice management service, such as M-Scribe, that employs billers and coders experienced in billing for urgent and emergency care.

Their experienced analysts can help determine whether a contract includes fair reimbursement rates as well as renewal or auto-renewal provisions and dates. A thorough review, as recommended above, of your accounts receivables (A/R) can pinpoint where and why your practice may be having “leaks” in revenue.

For a free analysis of your practice’s revenue management policies, needs and goals, as well as developing workable solutions, contact our representatives at 888-727-4234 or email. Working with an experienced practice management service can make the difference between a paid urgent care claim and one that’s denied. 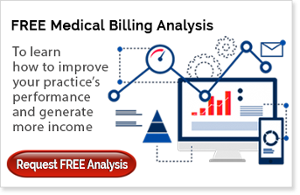 A place for physicians and other healthcare stakeholders to share and discover information about everything related to running efficient medical practices.

Established in 2002 by a group of physicians, we are a national provider of medical billing services to group practices, clinics, and individual physicians. We also specialize in provider credentialing, payer contract reviews, and medical coding for a wide range of clients - from solo practitioners to multi-site, multi-specialty practices.